2017 Transaction Volume Down Slightly From 2016

The 2017 preliminary closed transactions data is in and it shows a slight decline in dollar volume compared to 2016. Seniors housing and care closed transaction volume in 2017 registered $14.1 billion, which included relatively weak second and fourth quarter transaction volume. The $14.1 billion includes $7.9 billion in seniors housing and $6.2 billion in nursing care.  The total volume was down 2.8% from the previous year’s $14.5 billion, but down 35.5% from 2015 when volume came in at $21.9 billion.  If these figures hold as we finalize the 2017 numbers then it will be the lowest year in closed transactions volume since 2012.

As noted above, one of the weak quarters for closed transaction in 2017 was the fourth quarter. The fourth quarter is historically a strong quarter compared to the rest of the year.  However, in 2017 it represented the lowest in terms of dollar volume. Not only was the dollar volume the weakest in the fourth quarter, but the number of deals closed was also the smallest of the year, which is highly unusual.  Sometimes we’ve seen a very large deal closed within the year that skews the dollar volume in the first, second, or third quarter, but when looking at the absolute number of closed deals, you mostly see the fourth quarter as highly active.  Of course, one main reason for this could be the wait-and-see approach as the tax overhaul was unfolding as 2017 came to a close. Time will tell if deals were delayed into the first quarter of 2018, or perhaps the second quarter.

As far as the size of the deals, small deals of $50 million or less dominated in the fourth quarter, more than usual, representing 95% of all deals closed.

Stay tuned for final 2017 figures coming in a February blog along with the latest on buyer composition. 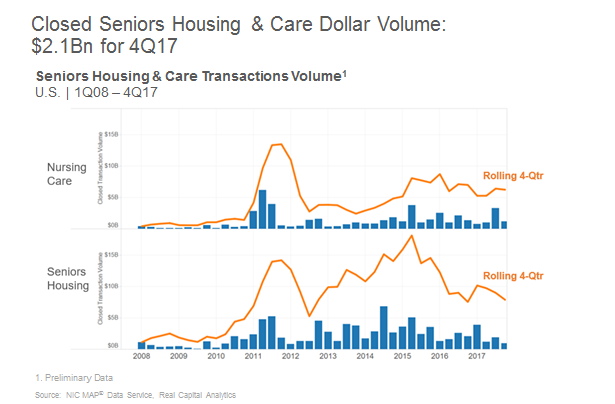