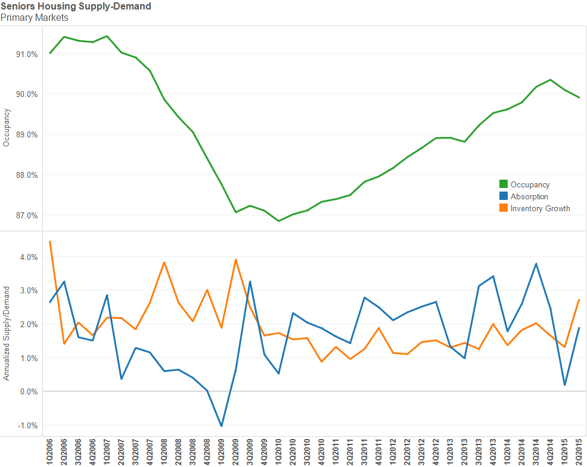 Occupancy has declined in two consecutive quarters, although the first quarter decline was driven by anemic demand, while the second quarter was driven by supply. Prior to this year, occupancy had enjoyed few setbacks since 2010, with occupancy rising from 86.8% to 90.4%, an increase of 360 basis points. So far in 2015 occupancy has given back 70 basis points of those gains, but still remaining above year ago levels. Given current rates of construction, occupancy may be hard-pressed to rise in the near-term, although there will be more significant supply pressures in assisted living.

Minimal Supply Pressures in Independent Living, but Occupancy May Be Peaking

Independent living has fared a bit better so far this year, benefiting from far less pressure from supply. The fastest annual rate of inventory growth independent living has had to overcome since 2012 is only 1.5%, a rate absorption has generally been able to surpass. We say generally, as this wasn’t the case during the second quarter. Inventory grew at a 1.5% annual rate, with absorption coming in sizably slower at a 0.7% annual rate. 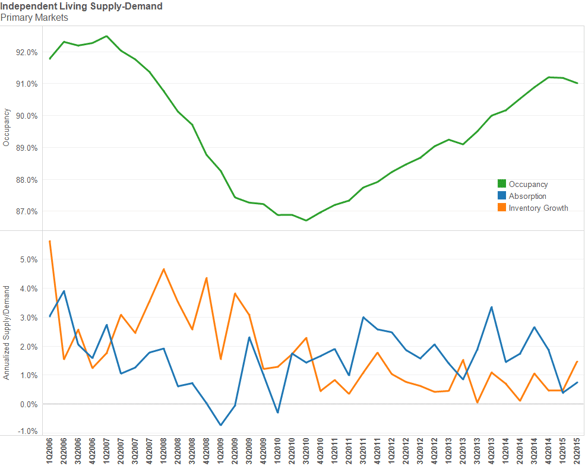 Independent living was also victim to a soft first quarter, with absorption slumping from a 1.9% annual rate in the fourth quarter to 0.4%, but inventory only grew at a 0.5% rate, allowing occupancy to remain essentially flat despite soft absorption. With only modest rates of construction to contend with, we do expect occupancy to drift up 20 basis points from its current rate of 91.0% during the next four quarters.

While occupancy may be pressured by supply growth in the coming quarters, some areas will be affected more than others. In terms of construction, San Antonio had the highest rate of construction within the primary markets at 17.0% as of the second quarter. It may be challenged to absorb these new units, as demand has been rather anemic since 2012. In fact its occupancy rate is at its lowest level in at least ten years. Other noteworthy markets in terms of construction include Houston, Sacramento, and Atlanta, all of which have construction exceeding 10% of their respective supply.

On the other end of the spectrum, 10 of the 31 primary markets have construction representing less than 2% of their respective supply, with one market, Pittsburgh, having no reported construction as of the second quarter. These markets will face minimal downward pressure on occupancy in the near-term, while other markets, such as San Antonio, will face continued downward pressure due to sizable rates of inventory growth. It further highlights the need to drill down to at least the metro level to get a good handle on development.