A key topic of conversation among seniors housing investors and operators is the impact of inventory growth on occupancy rates and the ability to grow rents and revenue. Related to inventory growth are rising costs of construction, which may be one factor influencing a slowing of construction activity. This blog highlights some recent data to support those discussions.

Seniors housing construction may be plateauing. NIC MAP® data from the fourth quarter of 2018 continues to suggest that construction activity may be slowing. There were roughly 37,000 units under construction at Seniors Housing properties (Majority Independent Living (IL) and Majority Assisted Living (AL)) for the NIC MAP 31 Primary Markets. That figure is down from the record high of 43,826 in the fourth quarter of 2017 or by nearly 6,500 units. Moreover, construction as a share of inventory slipped back to 6% of open inventory in 4Q2018, down from the recorded high of 7.3% in 4Q2017.

Construction starts (units that have newly broken ground) for both Majority IL and Majority AL are also trending lower. In the fourth quarter, AL starts totaled nearly 1,552 units, the fewest starts since the first quarter of 2012. On a four-quarter aggregate basis, starts totaled 9,393 units, the fewest since 2014. As a share of inventory, this amounted to 3.3%. The last time it was below 4% was 2012. IL starts, on a rolling four-quarter basis, totaled 7,287 units in the fourth quarter. As a share of inventory, this equaled 2.2%. The last time it dropped below 2.5% was 2014.

It is important to note, however, that construction data sometimes is restated—both up and down. Construction starts are some of the most commonly restated data points as they are particularly difficult to capture, so these numbers are likely going to see some changes. We occasionally find out that a project has broken ground after it has done so or that a property indicated ground break pre-maturely. Part way through a project, a property manager may adjust their plans for unit mix based on pre-leasing patterns, unforeseen challenges, or other factors. Changes to unit mix can also mean changes to a property’s majority property type designation.

Their recently released special brief on Winter 2019 Seniors Housing Construction Costs indicates costs rose by 6 to 8 percent year over year. Weitz cites tariffs and labor challenges as contributing factors to the rising costs. As the Weitz reports highlight, geographic variations in cost are notable. The data in the graphic below present figures on a city index of 100, with an example of Wichita, KS (city index 85.6) in the furthest right two columns, demonstrating local variability by product type. For example, there is a cost range of $134 to $159 per square foot for independent living in Wichita, while Philadelphia, which has an index of 115.2, translates to a cost rate of $180 to $214 per square foot. 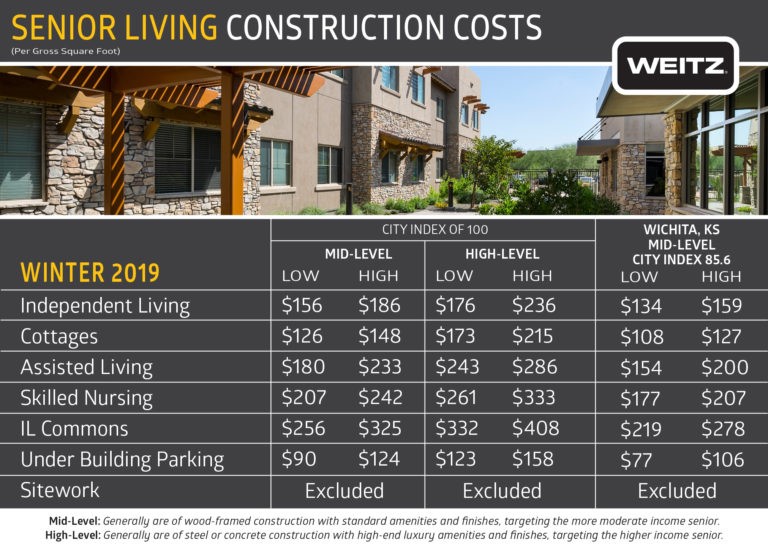 Local variation exists in seniors housing construction. Not only do costs differ by region, but construction activity also varies due to local development cycles and broader macroeconomic factors. The heatmap below shows local market variation.  Although many markets are “cooling” (as evidenced by the blue tones), some metro area markets still have heightened activity. One case in point is Atlanta, which of the CBSAs in the Primary Markets, had the highest level of construction as a percent of its inventory for 4Q18 at 14.8% (it was 6% for the Primary Markets). Close behind Atlanta is Sacramento, which remained at its record high level of construction as a percent of inventory (12%) for the second consecutive quarter. 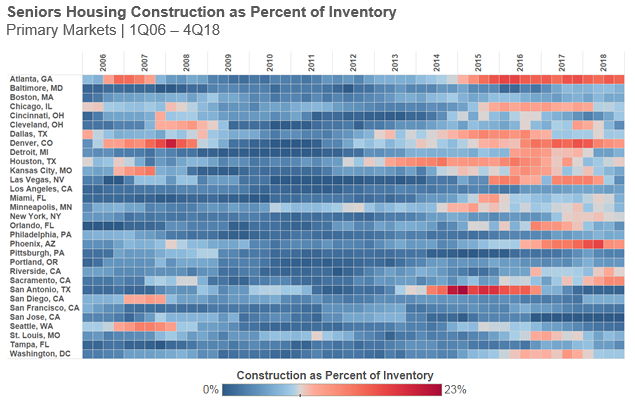 Conclusion: many factors could be at play. Construction activity for seniors housing appears to be slowing—by both measurements of starts and active construction underway. While this would be good news for many operators and investors who have been facing the consequences of new supply and competition, we remain cautious until several more quarters of data validate this trend. The slowdown, should it stick, may reflect rising costs, as showcased by the Weitz data as well as other cost and wage data not discussed in this blog. Other factors impacting construction activity may include a tighter lending environment by many of the larger banks and lenders, a more competitive employment environment for retaining construction workers, more cautious investment attitudes at this stage of the development cycle, and possibly concerns about the broader national economy. Additionally, markets experiencing declining occupancies may be discouraging developers from pursuing new projects in potentially challenging areas.