Similar to the intent of “class categorizations” seen across other commercial real estate property types, NIC MAP® has recently developed a “rate tiers” approach to our seniors housing property database that is quantitative and objective, with a goal to further segment our data for our clients. Useful to investors, analysts and senior living operators who wish to benchmark their properties to properties with similar rate structures, this approach allows NIC to promote greater transparency within the seniors housing property type and creates greater comparability to other commercial real estate property types.

The example below shows the standard four charts found in this report for the New York metropolitan market from 4Q2018. 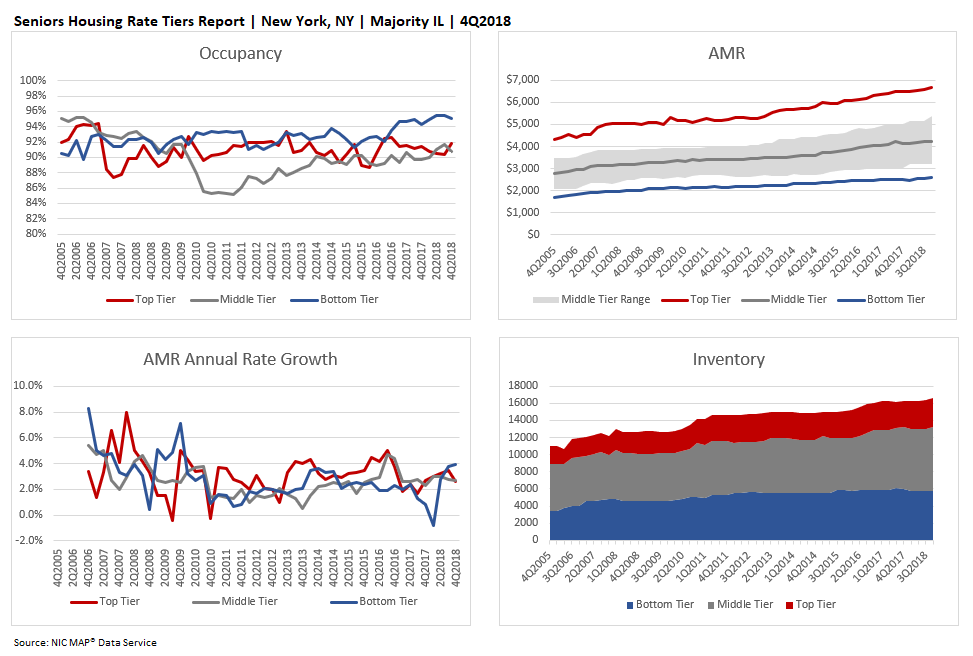 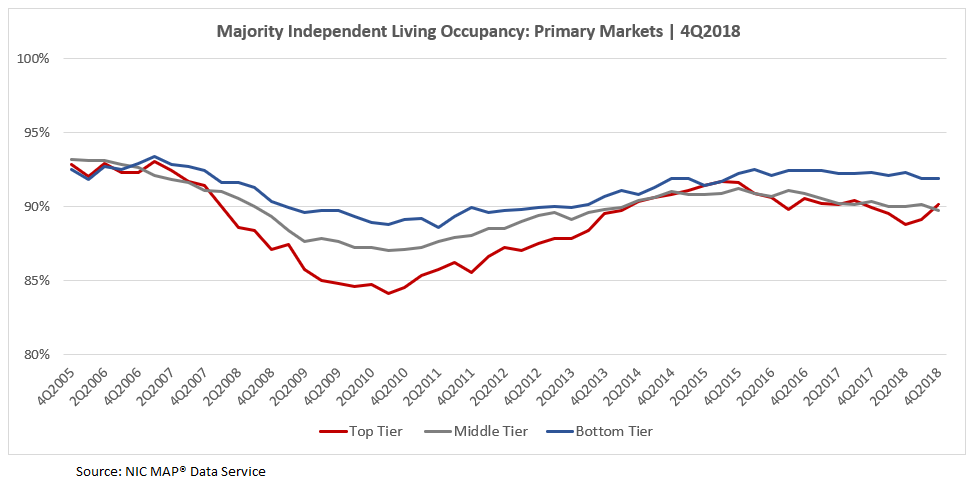 However, rate tier occupancy for majority assisted living property types in the 31 Primary Markets followed a different pattern. Bottom tier majority assisted living property occupancy rates were lower than the top and middle tiers leading into and through most of the Great Recession. Coming out of the Great Recession, majority assisted living inventory grew at a faster pace than majority independent living, and occupancy across rate tiers was relatively narrow until it began to diverge around the fourth quarter of 2014, as strong supply growth outpaced demand. Since then, bottom tier occupancy rates have exceeded the top and middle tiers. In 4Q2018, majority assisted living occupancy in the 31 Primary Markets was 85.4%, near its record low rate of 85.3% reached in 2Q2018, when the difference between the bottom and top tiers was the widest at 4.9 percentage points. As of the fourth quarter, the difference between the bottom and top tiers is 4.4 percentage points.

In the coming months, NIC will begin to explore a number of intriguing questions raised by the data:

The “rate tiers” approach to NIC’s seniors housing property database is, indeed, a “game changer.” This new report provides NIC MAP clients another way to segment the data with increased granularity, allows for greater comparability to other commercial real estate property types, and delivers on NIC’s mission to promote greater transparency within the seniors housing sector.