How Have Seniors Housing and Care Segments Performed Since the Recent Market Cycle Peak?

Seniors housing is a multifaceted property type in commercial real estate, in part, because it is comprised of several different housing and care products designed to meet the diverse needs and desires of the older consumer. Product segments range from independent living, which focuses on hospitality and lifestyle services for healthy, active seniors, to assisted living for residents who are not fully independent and need help with daily activities, to memory support and nursing care units, which provide residents round-the-clock licensed, supervised medical care.  Any of these product segments may be found as a stand-alone building, and they are frequently combined in one or two buildings or clusters of buildings to form a campus of continuing care.

The following analysis details care segment performance in the Primary Markets since the most recent market cycle peak that was reached in the fourth quarter of 2014. The analysis looks specifically at the changes in occupancy, average annualized asking rent growth, and inventory growth for the independent living, assisted living, memory care and nursing care segments. Care segment-level data is available in the CBSA Trends report in Batch Data Files through the NIC MAP® Client Portal.

For context, the chart below shows seniors housing fundamentals in the Primary Markets since the first quarter of 2006 through the second quarter of 2018. Seniors housing is defined as majority independent living and assisted living property types (the latter includes memory care but excludes nursing care). “Majority” property types are designated by the segment that comprises the largest share of a property’s inventory mix. For example, a 100-unit property with 60 independent living units, 20 assisted living units and 20 memory care units would be classified as majority independent living. Peak and near-peak occupancy rates were reached in the quarters leading up to the Great Recession, and more recently, in the second half of 2014, when the occupancy rate hovered around 90% for several quarters. In the beginning of 2016 the seniors housing occupancy rate began a 10-quarter decline as inventory growth outpaced absorption, falling to 87.9% as of the second quarter of 2018. This was the lowest occupancy rate in seven years. 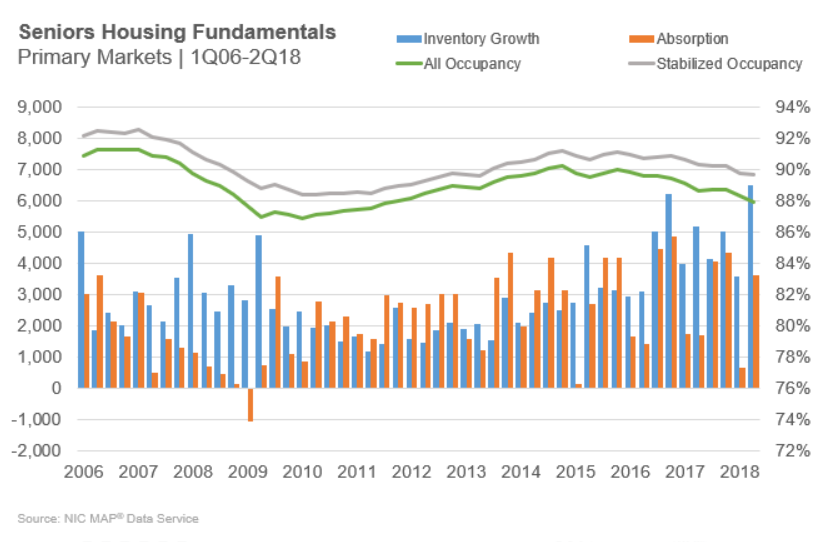 So how have seniors housing and care segments performed since the recent market cycle peak? While all segments saw declines in occupancy from the fourth quarter of 2014 to the second quarter of 2018 due to inventory growth outpacing absorption, the independent living segment performed the best in terms of occupancy and average annualized asking rent growth. The memory care segment had the weakest comparative performance, overall, with the strongest change in inventory, which put pressure on the segment’s occupancy rates and rent growth.

This analysis has provided a broad overview of the relative performance of the different seniors housing care segments in the Primary Markets. However, it just scratches the surface of the analytics that can be developed for market area, regional, metropolitan and county-level insights. Further analysis on this topic is available to NIC MAP® clients in the NIC MAP client Insights Newsletter.