The decline in skilled nursing property occupancy has been a topic of discussion for the past few years. And as we take a deep dive into the occupancy trends, we see that it indeed decreased 180 basis points from 84.6% in October of 2011 to 82.8% in December of 2015. This drop was likely caused by increased resident turnover resulting from a decline in average length of stay, especially for short-stay residents due to the increased penetration of managed Medicare (a.k.a. Medicare Advantage). The decline in occupancy accelerated in the last 12 months, dipping 144 basis points from 84.2% to 82.8%. The decline in the final quarter of 2015 was 30 bps. 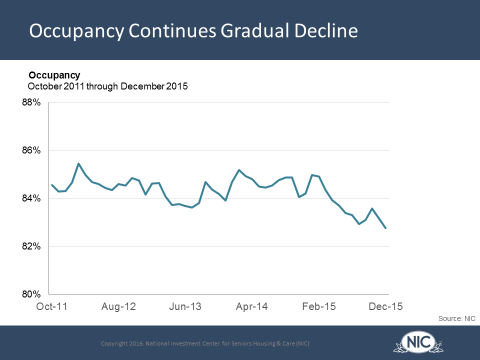 If the decline in occupancy has been a central subject for discussion in our industry, Medicare Advantage (MA) is even more so. The report showed that rates per day decreased by 10.1% from October 2011 to December 2015 as managed care rates were cut and companies increased their enrollments, giving them greater power to negotiate pricing with providers. The rate fell from $482.66 to $434.15 during the period for a compound annual growth rate of -2.5%. The pace of decline picked up in the last year, as  the rate declined from $453.32 to $434.15, a -4.2% decline. 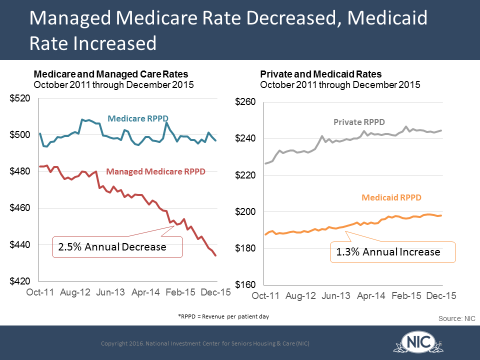 A Seasonal Influence on Quality and Skilled Mix?

Quality mix, which includes all payer sources but Medicaid, was flat from October 2011 to December 2015, experiencing some volatility but staying around 34.5%. Skilled mix, which represents mostly Medicare and Managed Care residents, increased by 1.6% over that same time period and was 25% as of December 2015. Quality and skilled mix typically spike in February and March each year, suggesting some seasonality. For example, in February 2015, skilled mix increased to 27.5%, up from 25.8% in December 2014, potentially caused by the flu season. We may not see the same spike in 2016, since the flu has not been as prevalent this year. The main takeaway, however, is that both skilled and quality mix have stayed relatively stable over the past few years, with skilled mix increasing slightly. The next update to the Skilled Nursing Data Report may shed more light on the seasonal influence on quality and skilled patient mix.