At around $200 per day, Medicaid is the lowest priced payor source for skilled nursing properties. The American Health Care Association (AHCA), a trade association representing skilled nursing providers, has been calling on policy makers to address Medicaid reimbursement rates for years. Until recently, this concern did not draw significant attention from outside the industry. Within the last month, however, the issue of funding levels from public sources for long-term nursing home stays has entered the spotlight.

Let's break it down: Medicaid as a payor source for skilled nursing providers

According to the 4Q2017 NIC Skilled Nursing Report, Medicaid reimburses skilled nursing properties at an average national rate of $206, less than half the rate paid by Medicare and Managed Medicare, $503 and $433, respectively. For private payors, the reimbursement rate was $257 at the end of the fourth quarter 2017. The Medicaid rate stems from an increase of $4 from year-end 2016.  In December 2016, the year-over-year increase was $3 and in 2015, the year-over-year increase was $1. 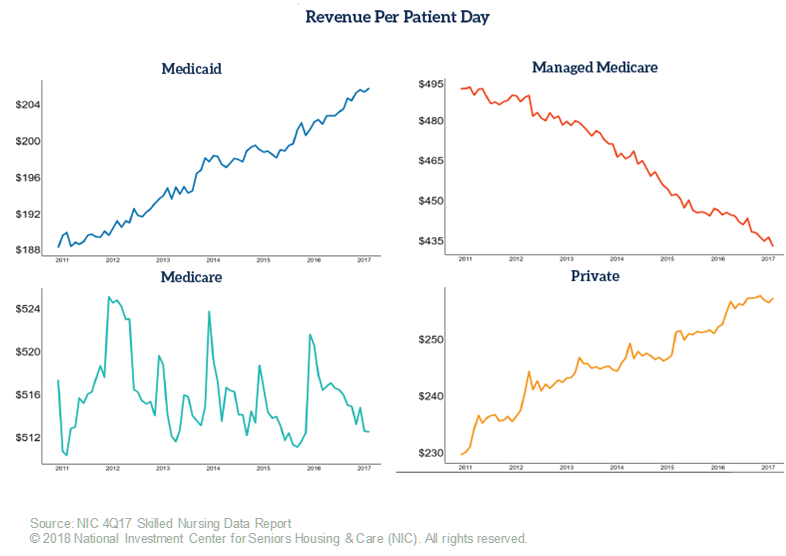 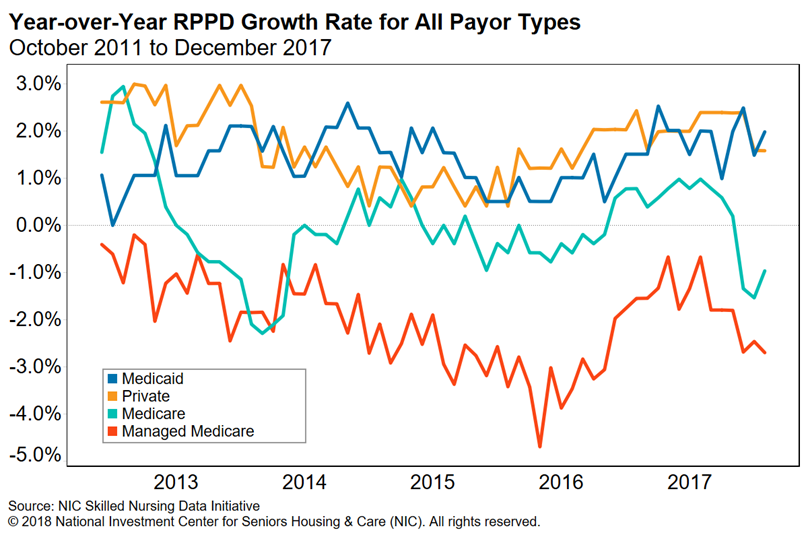 Revenue Per Patient Day (RPPD) only tells a part of the story, though. Even as the year-over-year growth rate for Medicaid RPPD increases (albeit slowly), the margin of increase ($1-$4) may not offset declines in patient day mix for the higher Medicare and managed Medicare payor sources payor sources.

To better understand how RPPD and patient day mix impact skilled nursing properties, NIC has recently introduced a new metric to the Skilled Nursing Report: Revenue Mix. Indeed, as the charts below indicate, Medicaid revenue, as a share of overall revenues, is on the rise. As Medicaid becomes increasingly more important to overall skilled nursing revenues, more attention may be drawn to Medicaid RPPD. Indeed, the New York Times, citing NIC data, recently published an article highlighting the gulf between Medicare and Medicaid RPPD. 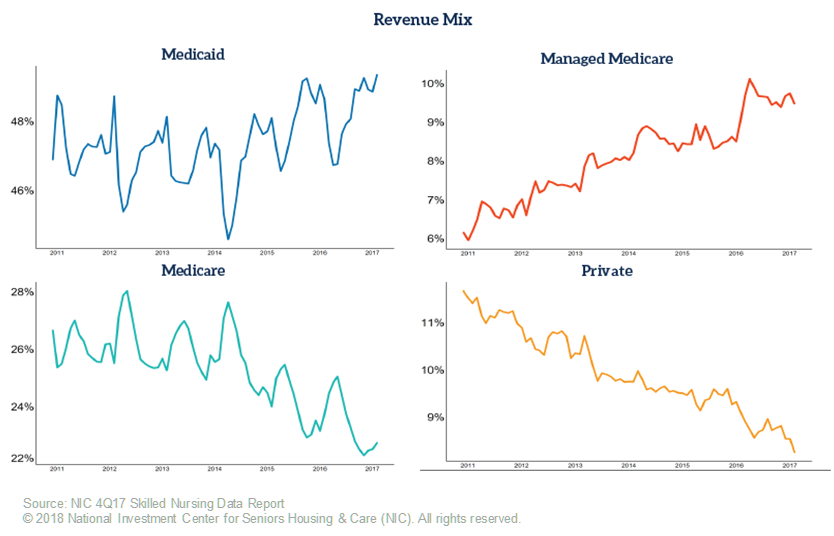 Another addition to the Skilled Nursing Report is the inclusion of urban and rural trends. As a recent Skilled Nursing News article pointed out, urban and rural providers have different challenges and opportunities, and those differences are evident in Medicaid mix, RPPD, and revenue mix. For example, Medicaid RPPD is lowest for rural properties, averaging only $193 as of the fourth quarter, compared to $209 for providers in urban areas.

The big question: Is it enough?

According to AHCA's research, the rate paid by Medicaid for long-term care of nursing home residents may be inadequate. In some states, AHCA contends, the rate is actually less than the cost of care, leaving providers to leverage the other payor sources (Medicare, managed Medicare, and Private) to offset losses. AHCA is not alone in this sentiment. On March 13, a group of concerned citizens in Missouri lobbied in the state capital to advocate for proposed legislation that would reform Medicaid to "bridge the gap" between the cost of care and the state's Medicaid reimbursement rate, according to the Missourian. And in Washington state, a bill narrowly failed that would create a payroll tax to offset the cost of long-term care for seniors to help low-income nursing home residents avoid spending down all of their assets before qualifying for Medicaid. The New York Times reported that the failed legislation is indicative of a national trend, stating, “legislators are increasingly worried about the growing number of older residents, many of whom don’t even have enough money saved for a comfortable retirement, let alone nursing home bills that can sometimes top $100,000 per year.”

Because Medicaid is a program funded and regulated by both the states and the federal government, reform impacting the daily reimbursement rate could occur at either the state or federal level. Federal Medicaid reform could impact the available budget for states’ Medicaid programs, which could have an impact on the Medicaid reimbursement rate. Furthermore, the current administration has stated its desire to grant states more flexibility to use Medicaid dollars to provide care in lower-cost settings through home-and-community based services. The attempt in Washington state to make more funds available for long-term care would be an example of how state reforms could impact the skilled nursing industry. Keep an eye on the NIC Skilled Nursing Data Report, released quarterly, as we track these national trends in Medicaid reimbursement.