The unemployment rate held steady at 3.7% in October, which is the lowest rate since December 1969. The jobless rate remains well below the rate of what is generally believed to be the “natural rate of unemployment” of 4.5%, which suggests that there will be building pressure on wage rate growth. 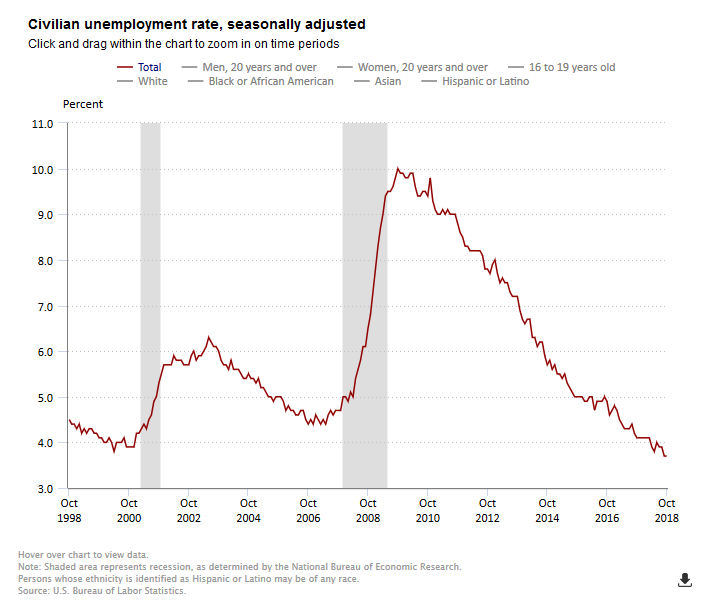 Evidence is mounting that this is in fact starting to occur.  Average hourly earnings for all employees on private nonfarm payrolls rose in October by five cents to $27.30. Over the past 12 months, average hourly earnings have increased by 83 cents, or 3.1%.  This was the strongest pace since 2009.  Last year, they rose by 2.6%.  A separate survey, the BLS’s quarterly Employment Cost Index (ECI) also showed acceleration in wage growth, with a year-over-year increase of 3.1% in wages and salaries in September, up from 2.6% a year ago. The 3.1% increase was the fastest pace since the financial crisis.  By industry group, nursing and residential care facilities saw a 3.0% gain in wages and salaries, up from 2.8% a year ago.

A broader measure of unemployment, which includes those who are working part time but would prefer full-time jobs and those that they have given up searching—the U-6 unemployment rate—fell to 7.4% from 7.5% in September.

The Labor Department also reported that there were 250,000 jobs created in the U.S. economy in October, above the consensus expectation of 200,000.  This was the 97th consecutive month of job growth.  However, September was revised down from 134,000 to 118,000 and August was revised up to 286,000 from 270,000.   The September figure may have been negatively affected by Hurricane Florence. Payrolls have averaged 218,000 per month for the last three months and 213,000 for the past ten months, up from 182,000 last year.  It is important to note that he jobless rate is calculated from a different survey than the survey used to calculate the number of new jobs (the household versus the establishment survey, respectively).

In October, employment in health care rose by 36,000, with 8,000 of these positions occurring in nursing and residential care facilities. In the past year, health care has added 323,000 jobs.

The labor force participation rate, which is a measure of the share of working age people who are employed or looking for work increased to 62.9% in October from 62.7%, still very low and near its cyclical low of 62.3% in 2015.  The low rate at least partially reflecting the effects of an aging population. 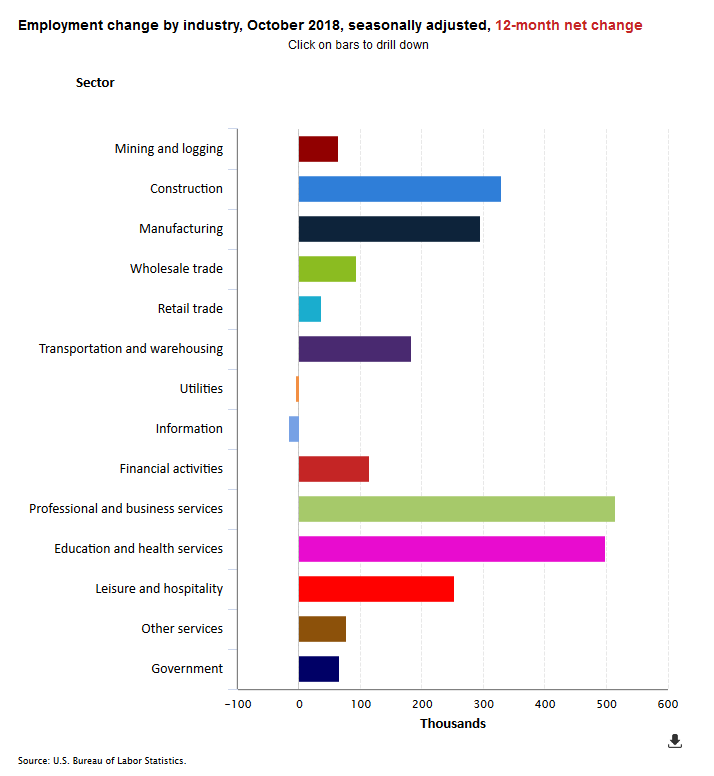 The October jobs report and the acceleration in the salary and wage data will provide further support for increases in interest rates through 2018 by the Federal Reserve. As widely expected, the Fed increased the fed funds rate by 25 basis points at its September FOMC meeting, the third increase in 2018.  The Fed has raised rates by a quarter percentage point eight times since late 2015, and most recently to a range between 2.00% and 2.25% after keeping them near zero for seven years.  It is widely expected that the Fed will raise rates at the next FOMC meeting to be held in December, with another three rate hikes anticipated in 2019, pushing rates toward 3.4% by 2020.