The transactions market for seniors housing & care (SH&C) properties in the U.S. remained active in the first quarter, with more than $4.0 billion in property transactions. Publicly-traded health care REITs continued to be the dominant investors, with their volume representing more than 60% of overall SH&C transactions volume. The majority of their SH&C acquisitions during the first quarter were in seniors housing, totaling nearly $2.3 billion compared to $370 million in nursing care acquisitions. 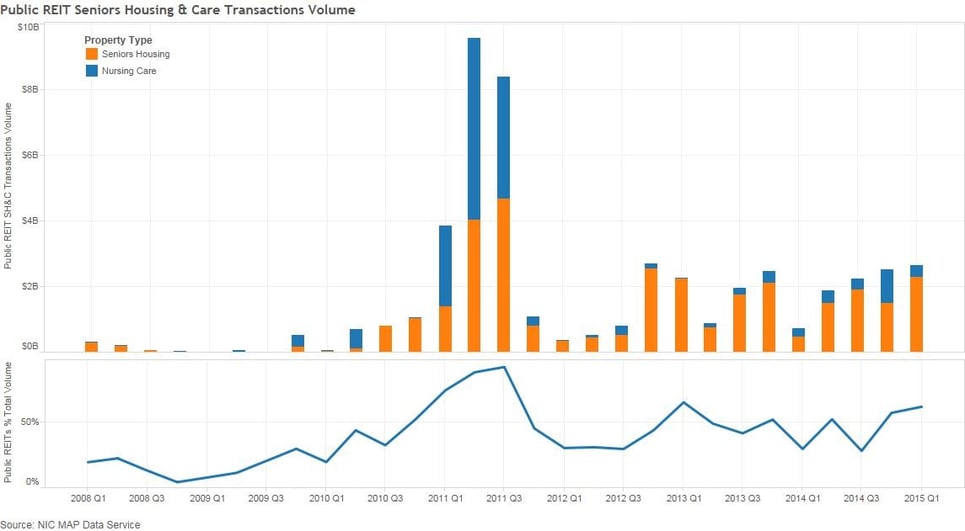 While the booming pace of SH&C transactions volume from the public REITs during 2011 was a record-setting anomaly, the public REITs have maintained significant investment activity in the years since. The public REITs have invested more than $18.0 billion in seniors housing properties since 2012, representing nearly half of overall seniors housing volume. Their investment in nursing care properties has been sizably lower at only $3.6 billion, but that still represents nearly 30% of all nursing care transactions volume during that time.

Since 2011, investment within SH&C has spurred tremendous growth in the publicREITs, as their running SH&C volume through the first quarter of 2015 has totaled nearly $45 billion, which represents 58% of overall SH&C volume during that time. The ‘big three’ have accounted for nearly $33 billion of that activity, spurring them to be now rankedamongst the largest globalREITs, withHCN at #8,Ventas at #11, andHCP at #20. The story for continued investment in the coming years remains compelling, given the combination of favorable returns and the forthcoming U.S. demographic tsunami.