Seniors Housing and Care Transactions Volume Down in 2Q: Part I

Although the volume decrease was more noticeable in the second quarter of 2016, the trend in decreased volume really started back in the third quarter of 2015, when the public buyers (namely, the publicly traded REITs) significantly decreased their activity. This time around, the private buyers (including private REITs) have joined the public side in remaining quiet. Part II of this blog, being released on August 17, will go into greater detail about the buyer types.

The rolling four-quarter total seniors housing and care volume also was down significantly, decreasing 33.5% from the prior quarter—from $21.2 billion to the now $14.1 billion. This change is noteworthy because it is the first time the rolling four-quarter volume dipped below $20 billion since the fourth quarter of 2014. 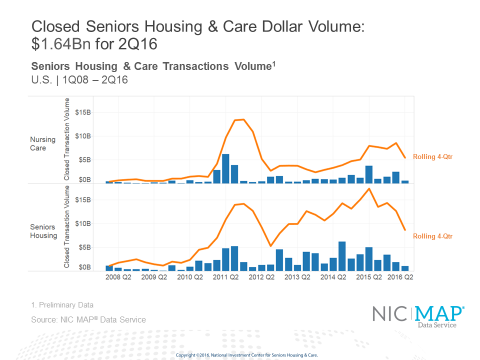 Number of Deals Down

In the second quarter, we saw fewer than 100 deals close—something that has not occurred since 2013. Back then, longer-term bond rates were rising as the Federal Reserve indicated that its policy of Quantitative Easing (QE), where it purchased bonds, was likely to change. This proposed change in policy led to the so-called “taper tantrum,” as panic spread in bond markets, yields rose quickly, and government bond prices fell sharply. As a result, we saw some abrupt movements in the capital markets, including a sharp decline in public REIT stock prices, which in turn raised their cost of capital. The second quarter of 2016 saw only 76 total deals close. These are preliminary numbers, but they currently represent a 44% drop in total deals from 136 in the first quarter of 2016.

When we look at deal size, large deals over $1 billion have been rare, but what’s most noticeable is that we have not seen any deals close in the $250 million to $500 million range for the past two quarters. Those deals have been a solid driver of activity in the past.

On Wednesday: A closer look at buyer types.

Data at the Conference

Hear the recent market trends in seniors housing and care at the 2016 NIC Fall Conference.