Penetration rates vary across markets and across time.  Some of the variation may be due to differing demand factors such as population and household growth and size, consumer preferences, familiarity and comfort with the product, changes in the composition of inventory, and cultural influences. This blog post explores some of this variation. 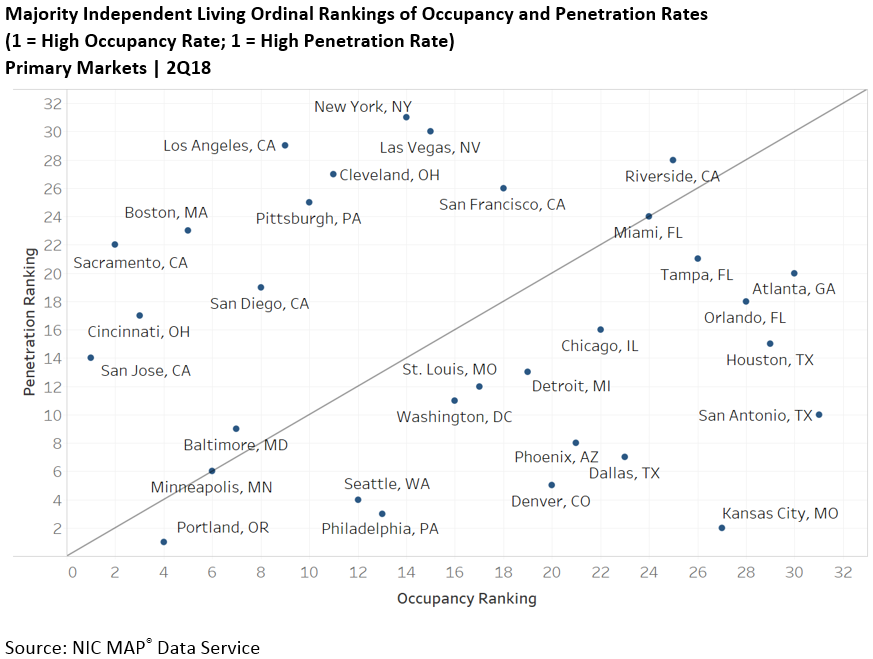 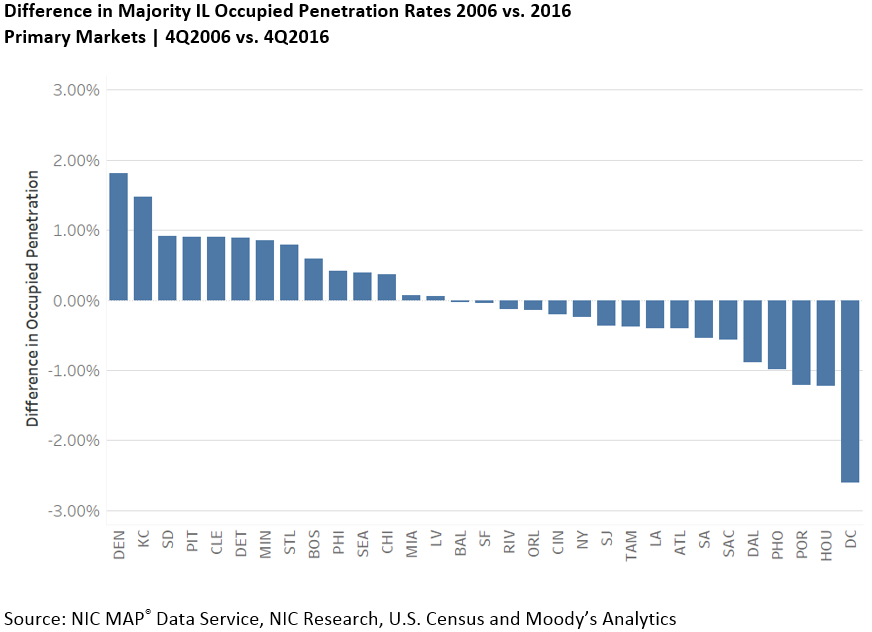 Why have some markets experienced rising penetration rates, while others have not?  The answer reflects underlying supply and demand factors, such as a comparison of growth in inventory compared with growth in households over age 75, demand-related factors such as familiarity with the product, demographic patterns of both seniors and their adult children, and in some cases idiosyncratic factors unique to each metropolitan area such as cultural comfort with the product offerings.  Operator reputation in a market may also help explain penetration rates.  This variability reinforces how important it is to evaluate conditions at a local market level.

Conclusion.  Penetration rates and occupancy rates do not have a clear-cut relationship across markets.  Penetration rates can increase when inventory growth outpaces household growth. In some instances, this may result in falling occupancy rates; but in others, occupancy rates remain steady.  Factors such as familiarity with the product type, marketing and education efforts, operator reputation, growth in the number of seniors and their adult children, variation in population health needs, local cost of living, affordability of product, and perhaps climate, can also influence penetration rates.

1 The Moody’s Analytics time series data for Households over age 75 based on the U.S. Census at this time is currently only available through 2016.

About Beth Mace and Anne Standish

Beth Burnham Mace is the Chief Economist and Director of Capital Markets Research at the National Investment Center for the Seniors Housing & Care Industry (NIC). Prior to joining the staff at NIC, she served as a member of the NIC Board of Directors for 7 years and chaired NIC’s Research Committee. Ms. Mace was also a Director at AEW Capital Management and worked in the AEW Research Group for 17 years. While at AEW, Ms. Mace provided primary research support to the organization’s core and value-added investment strategies and provided research-related underwriting in acquisition activity and asset and portfolio management decisions. Prior to joining AEW in 1997, Ms. Mace spent ten years at Standard & Poor’s DRI/McGraw-Hill as the Director of the Regional Information Service with responsibility for developing forecasts of economic, demographic, and industry indicators for 314 major metropolitan areas in the U.S. Prior to working at DRI, she spent three years as a Regional Economist at the Crocker Bank in San Francisco. Ms. Mace has also worked at the National Commission on Air Quality, the Brookings Institution and Boston Edison. Ms. Mace is a member of the National Association of Business Economists (NABE), ULI’s Senior Housing Council, the Urban Land Institute and New England Women in Real Estate (NEWIRE/CREW). In 2014, she was appointed a fellow at the Homer Hoyt Institute and was awarded the title of a “Woman of Influence” in commercial real estate by Real Estate Forum Magazine and Globe Street. Ms. Mace is a graduate of Mount Holyoke College (B.A.) and the University of California (M.S.). She has also earned The Certified Business Economist™ (CBE), which is the certification in business economics and data analytics developed by NABE. The CBE documents a professional’s accomplishment, experience, abilities, and demonstrates mastery of the body of knowledge critical in the field of economics and data analytics. Anne Standish is a Research Statistician in the Outreach Group at the National Investment Center for Seniors Housing & Care (NIC). At NIC, Anne is an important contributor to NIC’s analytics and has been involved in a number of initiatives focused on the analysis of NIC’s seniors housing time series data. While working at NIC, she received her M.S. in Applied Statistics from Villanova University. She also has a B.S. in Psychological & Social Sciences from Penn State Abington. Prior to NIC, she worked in a range of academic research positions. Outside of having a passion for quantitative research methods and statistical analysis, Anne also has an interest in data visualization.