This post is a follow-up to last month’s transactions data blog post, providing updated data for the fourth quarter of 2016.

As stated in the initial blog last month, 2016 started out as a tumultuous year in the capital markets. The significant increase in cost of capital most likely delayed the finalization of some deals, as we did not see the strong bounce back in deal volume in the second quarter as we had seen the past couple of years. Only $2.6 billion closed in the second quarter of 2016 after a relatively strong first quarter of $4.3 billion.

Then story is more positive when you look at transaction activity purely from a count of closed deals. From this perspective, the number of transactions was still relatively robust in 2016, with 513 deals closed. Transaction count was down 9% from 2015, when 563 deals closed—a record high for this database that dates back to 2008. In further comparison, 414 transactions closed in 2013 and 556 in 2014. 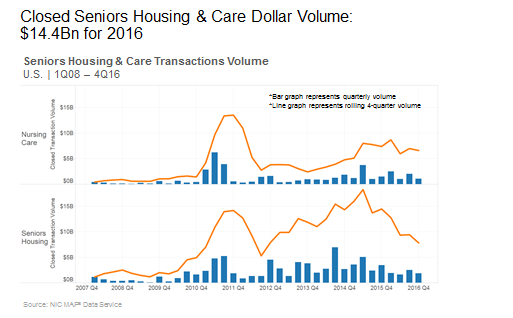 Private Buyer Steady, Public Activity Down, and Institutional Volume Up

In 2016, the public buyer volume was down 72% when compared to 2015, from $12.7 billion to $3.6 billion. The public buyer represented only 25% of the buyer volume in 2016 compared to 58% representation in 2015. There were many reasons for the decrease in public buyer activity, including some public REITs becoming net sellers and the challenging cost of capital throughout 2016, especially in the beginning of the year.

The private buyer type, which includes non-public operators, owners, and partnerships, stayed consistent between the past two years: $5.9 billion closed in 2016, as strong demand from an acquisition standpoint continued from that group. This group has consistently closed more than $1 billion each quarter, a trend reaching back to the third quarter of 2013. This past quarter registered $1.1 billion.

The institutional buyer actually increased by 40% from 2015 to 2016, from $3.1 billion to $4.4 billion, as more institutional capital became active over the past year. 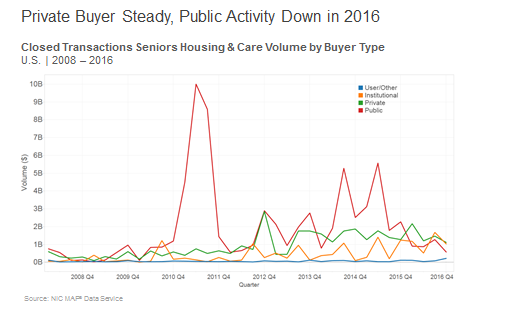 Seniors Housing Price Per Unit Down Slightly Year Over Year

The price per unit for seniors housing ended 2016 at $170,600. It has oscillated between $170,000 and $180,000 for the past couple years. While volume has decreased, the bid for properties is still relatively strong but has decreased from the peak of $181,700 in the second quarter of 2015, and has decreased in the latest year-over-year comparison.

In the March NIC Insider, I’ll provide additional details and commentary on the latest transactions data from the NIC MAP® Data Service. Be sure to check out the Insider online.

Seniors Housing and Skilled Nursing Market Trends at the 2017 Forum

What is the economic outlook for 2017? How will changes in fiscal and monetary policy affect access to capital? What market trends will influence your investment strategies or business plans this year?

Join the 2017 NIC Spring Investment Forum, March 22–24 in San Diego, to get the latest macroeconomic trends and NIC data on the seniors housing and skilled nursing sectors, including occupancy rates, supply and demand conditions, and a comparison of metropolitan market performance across the U.S.