Building upon the groundbreaking “Forgotten Middle” study and its subsequent update, NORC at the University of Chicago recalibrated a nationally representative forecast of the 2033 middle-market population to produce estimates reflective of future California residents. The analysis revealed several key findings about the potential unmet needs of California’s middle-income seniors, including:

While the middle-income senior population is expected to grow substantially in the next decade, only a portion will be able afford the projected cost of private-pay assisted living. With the annual out-of-pocket price point of assisted living and medical care in California at $75,000, even with housing equity, more than half (821,000) of middle-income seniors in California will likely not have the financial resources to afford them. Without housing equity, nearly 90% are projected to struggle with covering the cost of private assisted living over the next decade. 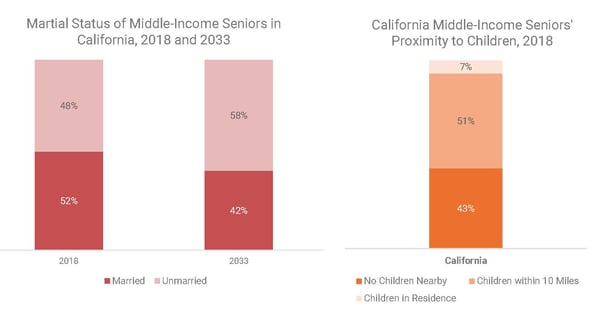 Having spousal support enables many people to stay in their homes longer and means assets and financial resources remain pooled together. Having children nearby means an increased likelihood of being able to utilize family caregivers. But as people have fewer children – and those children are increasingly less likely to live nearby – this solution becomes harder to make a reality.
These demographic shifts result in fewer available caregivers, which we know as a national ratio falls from seven adult children (aged 45 to 64) to care for one parent over 80 years old to four-to-one in 2030 and three-to-one in 2050. 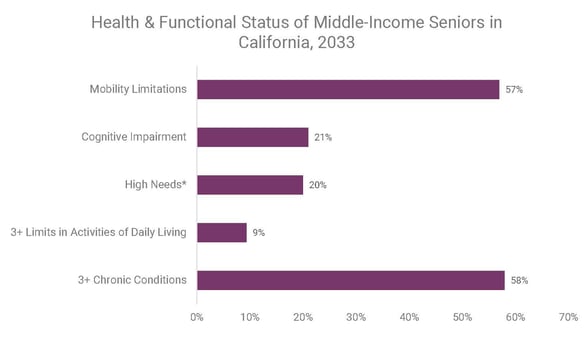 The study also found that most of California’s middle-income seniors are likely to develop multiple chronic conditions and mobility limitations in the next decade, making it challenging for them to live independently.

Additionally, researchers with NORC at the University of Chicago have created illustrative case studies that underscore and help provide examples of the impact these findings have for Californians. View the complete slide deck of findings, including methodology, key findings, case studies, and information on the “near dual” seniors cohort who are close to Medicaid eligibility.

Senior Principal Ryan Brooks works with the research team in providing research, analysis, and contributions in the areas of healthcare collaboration and partnerships, telemedicine implementation, EHR optimization, and value-based care transition. Prior to joining NIC, he served as Clinical Administrator for multiple service lines within the Johns Hopkins Health System, where he focused on patient throughput strategies, regulatory compliance, and lean deployment throughout the organization. Brooks received his Bachelor’s in Health Services Administration from James Madison University and his Master’s in Business Administration from the University of Maryland.