The table below compares each of the care segments—independent living, assisted living, memory care and nursing care—in the Primary and Secondary Markets. The table shows the 2Q 2021 total open units, occupancy and average monthly asking rent—and year-over-year changes for CCRCs and non-CCRCs.

The CCRC independent living care segment had the highest 2Q 2021 occupancy (88.4%), followed by CCRC assisted living and memory care (82.7%, respectively). The difference in 2Q 2021 occupancy between CCRCs and non-CCRCs was the highest for the independent living segment (9.6 percentage points), and the lowest for the nursing care segment (2.8 percentage points).

While overall occupancy declined from year-earlier levels for each of the care segments, CCRCs had lesser declines in overall occupancy than non-CCRCs. The differences are in part due to the relative influence of the majority inventory mix. The CCRC independent living care segment (which represents 55.5% of CCRC units) garnered the highest occupancy in the second quarter of 2021 (88.4%), as well as the smallest year-over-year drop in occupancy, falling 3.4 percentage points. The current nursing care segment occupancy rate in non-CCRCs, which represents 51.2% of non-CCRC units, was much lower at 74.4%, and fell 5.5 percentage points year-over-year.

The highest year-over-year asking rent growth was in the CCRC nursing care and memory care segments (2.1% and 2.0, respectively). The lowest was noted for non-CCRCs in the independent living care segment (0.0%). Note, these figures are for asking rates and do not consider any discounting that may be occurring. 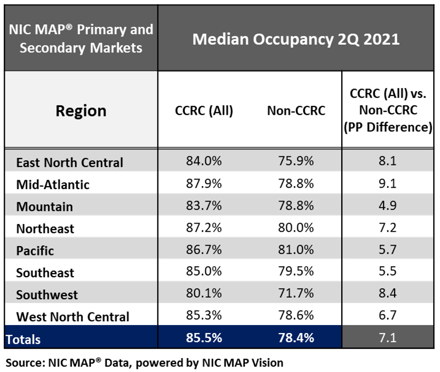 In the second quarter of 2021, three out of eight regions had median CCRC occupancy higher than the national median rate (Mid-Atlantic, Northeast and Pacific).

Look for future blog posts from NIC to delve deep into the performance of CCRCs.