After five quarters of negative absorption (change in occupied stock or a measure of demand) during the pandemic, CCRC unit absorption rebounded in the third quarter of 2021 to the strongest pace since 4Q 2008. This (and negative inventory growth) helped push occupancy up to 85.4%, which is 1.1 percentage points above its pandemic period low during the previous quarter, but still 6.2 percentage points below its pre-pandemic occupancy rate in the first quarter of 2020 (91.6%). 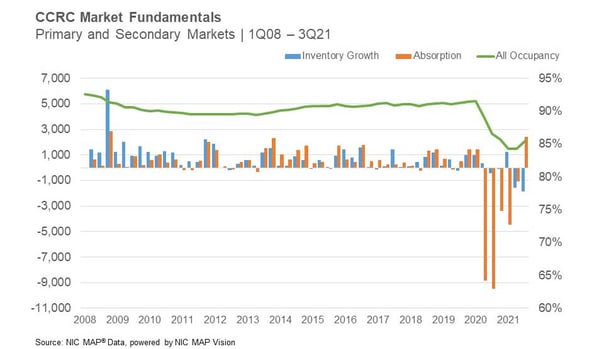 The CCRC independent living care segment had the highest 3Q 2021 occupancy (89.1%), followed by CCRC assisted living and memory care (84.0% and 83.3%, respectively). The difference in 3Q 2021 occupancy between CCRCs and non-CCRCs was the highest for the independent living segment (8.7 percentage points), and the lowest for the nursing care segment (2.8 percentage points).

The highest year-over-year asking rent growth was in the CCRC assisted living segment, followed by nursing care and memory care (ranging from 2.4% to 2.2%). The lowest was noted for non-CCRCs in the independent living care segment (0.5%). Note, these figures are for asking rates and do not consider any discounting that may be occurring.

All the New CCRC Units Under Construction are in Five Markets

Comparatively very little development of CCRCs has occurred in recent years (the median age of CCRCs is 35 years). Approximately 60% of existing CCRC units in the Primary and Secondary Markets are at properties that have been developed since 1980.

As shown below, considering all CCRC units under construction (both new and expansion units, not-for-profit and for-profit) 76% are located in four markets: Washington D.C., Austin, Memphis, and Knoxville. Construction as a share of existing inventory is highest in two Tennessee markets: Knoxville (29% or 149 units) and Memphis (21% or 299 units). 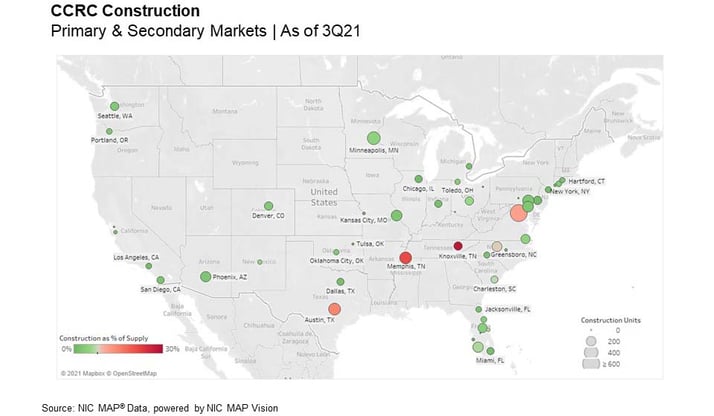 Look for future blog posts from NIC to delve deep into the performance of CCRCs.