In a continuation of NIC’s commitment to release data and insights on a monthly basis in response to rapid market changes, NIC released monthly data today from the NIC Skilled Nursing Data Initiative. This release incorporates key takeaways of market trends through May 2020. The following summarizes the monthly release with data from January 2012 through May 2020. 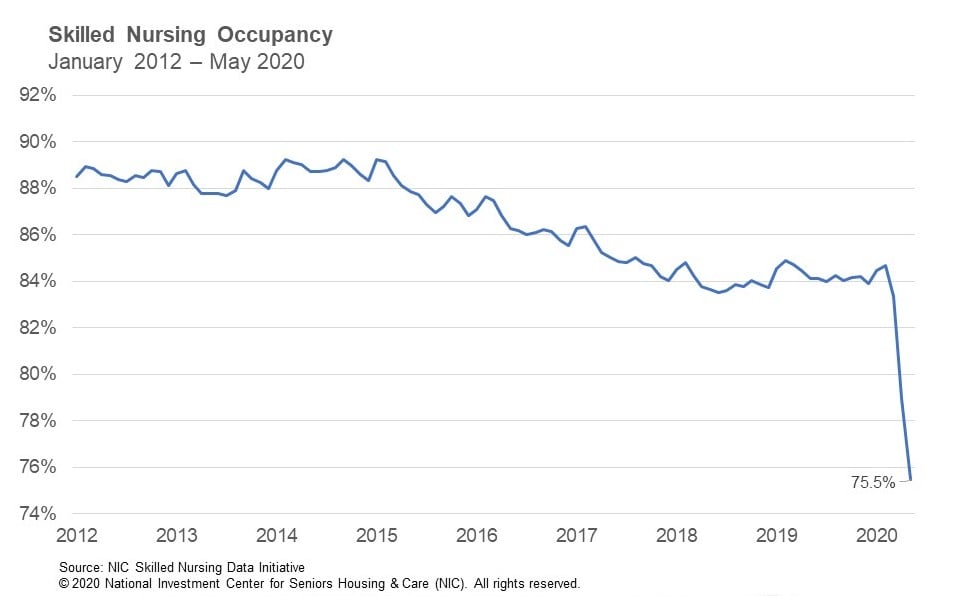 Medicare patient day mix increased 66 basis points from 11.3% in April to 11.9% in May. Since March, it is up 82 basis points. In addition, Medicare revenue mix was relatively steady from April to May, decreasing by only 11 basis points. When compared to overall occupancy, it is likely that the cancellation of elective surgeries continued to have a major impact on Medicare, even as many states have recently started to allow those surgeries to resume. However, Medicare patient days likely did not decrease as much as it would have given that the Centers for Medicare and Medicaid Services (CMS) waived the 3-Day Rule, which waives the requirement for a 3-day inpatient hospital stay prior to a Medicare-covered skilled nursing stay. This enables more patient days to be covered by Medicare, which can have a positive impact on cash flow, all else equal. Meanwhile, Medicare revenue per patient day (RPPD) increased 0.9% from $548.81 in April to $554 in May. Medicare RPPD likely increased because of additional reimbursement due to COVID-19 positive patients requiring isolation, in addition to the temporary suspension of the 2.0% sequestration cuts by CMS, which will be effective from May 1 through December 31, 2020.

Managed Medicare admissions are likely still experiencing declines because of COVID-19 even as some states resume elective surgeries, as many may still be hesitant to move forward with surgeries because of the pandemic. Many insurance plan enrollees will also be cared for at home after surgeries, bypassing skilled nursing properties. Managed Medicare revenue mix has declined significantly since February, dropping 307 basis points to 7.3% in May. Since March, it is down 228 basis points. However, Managed Medicare revenue mix held relatively steady from April to May and only declined by 27 basis points. Year-over-year, it is down 220 basis points from 9.5% in May 2019. Meanwhile, Managed Medicare RPPD increased 0.6% from $453.53 to $456.35 in May. Since March, it has increased by 1.21% suggesting some reimbursement stability from insurance companies during the pandemic. However, year-over-year RPPD is only up 0.4% from May 2019.

Medicaid revenue mix declined 96 basis points from 49.4% in April to 48.5% in May. Medicaid patient days likely decreased as well, due to lower overall admissions in May and some Medicaid patients converted to Medicare given the waiver of the 3-Day Rule. Medicaid revenue mix has declined 240 basis points since March when the mix was 50.9%. Year-over-year, Medicaid revenue mix decreased 268 basis points from May 2019. Meanwhile, Medicaid RPPD increased 0.4% from $230.30 in April to $231.26 in May. However, there has been an increase of $7.13 RPPD from February, representing a 3.2% increase as states embraced measures to help skilled nursing properties such as increasing reimbursement related to the number of COVD-19 cases at properties. Even with this increase the concern continues to be that current Medicaid RPPD does not cover the actual cost of care in most states. 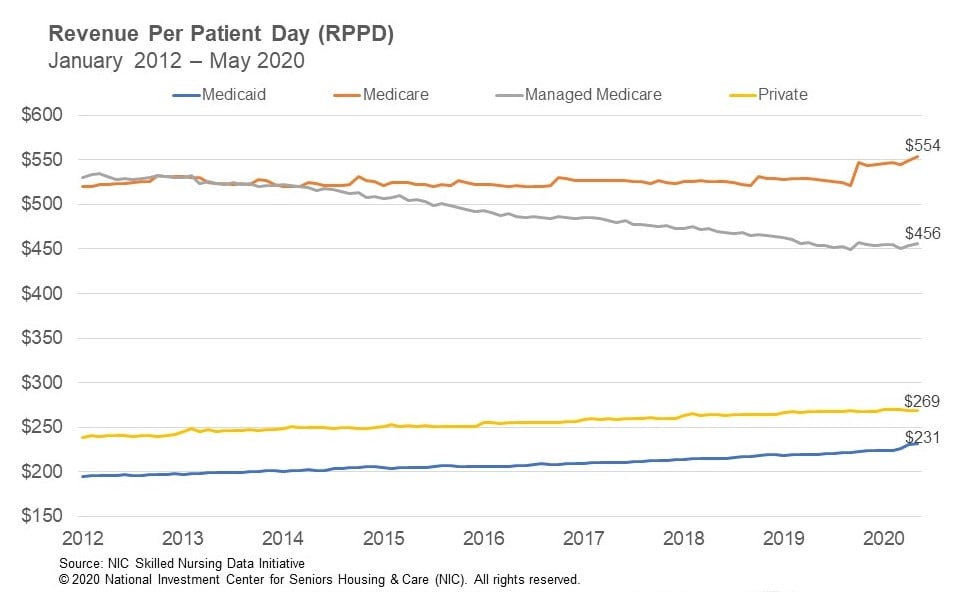 This analysis and commentary is based off of aggregate data from a sample of skilled nursing operators with multiple properties in the United States. NIC continues to grow its database of participating operators in the NIC Skilled Nursing Data Initiative in order to provide data at localized levels in the future. Operators who are interested in participating can complete a participation form here. NIC maintains strict confidentiality of all data it receives.