The aging of the U.S. population and the growing incidence of dementia make understanding the local prevalence of this disease more important than ever for planning senior housing projects.

Data show that degenerative brain diseases such as Alzheimer’s are more prevalent in certain parts of the country than others and understanding these patterns can make feasibility analyses more precise and reliable as well as allow for a better targeting of supply and demand. This blog presents selected portions of a longer analysis that we’ve published as a white paper. Analysis was conducted using NIC MAP Vision data.

Memory Care – Memory care is a senior housing product type that is specifically designed for residents with dementia. Properties where memory care is offered may have a secured/locked environment, design features that highlight sunlight, staff that has specialized training about dementia, spaces where residents can move about safely, and interactive activity stations for residents, among other features. Memory care in this article uses the segment type designation from NIC MAP, meaning that the inventory used in this analysis are memory care units that can be located at any type of property.

Total Medicare Beneficiaries with Alzheimer's or Dementia – The total Medicare beneficiaries with Alzheimer’s or dementia in a market area. These data are sourced from the Medicare Chronic Conditions Data Warehouse. NIC MAP Vision has access to these data from Medicare, and these data points are tied to the geographic location of the beneficiary. These data are accessible at a local level in the Vision LTC portal and are as of 2019, which is the most recent vintage of data available.

The number of people diagnosed with dementia is projected to grow

The number of people in the United States estimated to have Alzheimer’s disease in 2021 is 6.25 million, which is projected to grow to 7.16 million in 2025 and reach 12.73 million in 2050.2 Barring major medical breakthroughs like finding a cure for dementia, this means that the pool of potential residents for memory care is expected to see major increases in the coming years.

NIC MAP Vision provides Vision LTC subscribers with data from Medicare in the Vision LTC portal. These data are provided to NIC MAP Vision by Medicare in a process where the individual beneficiaries are kept anonymous. As discussed in a recent NIC Insider interview with Beth Mace and Arick Morton, CEO of NIC MAP Vision, underwriters no longer have to rely on national or state level data on dementia and can utilize local data when planning a product offering or evaluating a market.

This analysis focuses on the 31 NIC MAP Primary Markets. We looked at the number of dementia Medicare beneficiaries as a share of the population over 65 in each of the metro areas to investigate differing rates of dementia in local geographic population cohorts. Although most senior housing feasibility studies typically use older populations as a measure of potential demand, 65 is the current age at which someone can qualify for Medicare. In order to not overestimate the possible number of dementia or Alzheimer’s Medicare Beneficiaries in relation to the population in the selected metropolitan areas, this analysis uses population 65+.

Selected findings from the white paper

There are differing levels of dementia incidence by metro area and differing levels of inventory, meaning there may be imbalances in some markets and not in others, and individual markets may have varying levels of need as well as utilization of memory care units (as measured by occupancy rates). This finding may also extend to more granular areas than at the metro level. 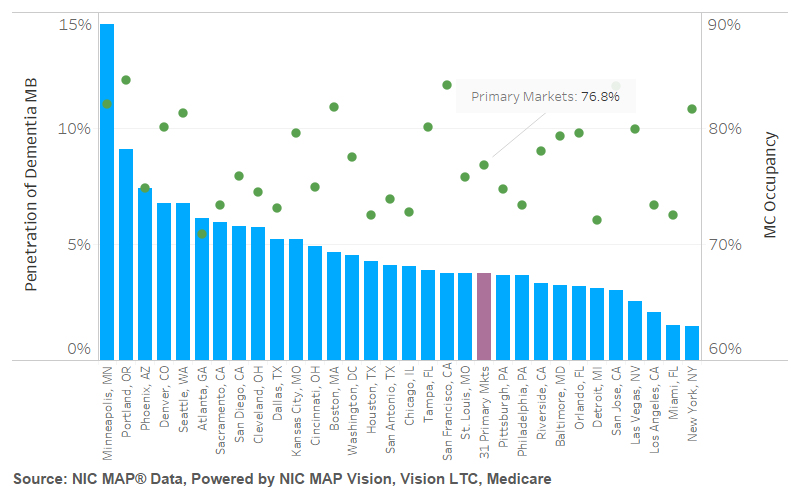 Additional metros are explored in more detail and additional graphs are reported in the white paper analysis. We encourage NIC Notes readers to download the full paper.

Understanding local incidences of dementia can help inform plans for new projects or expansions. This analysis demonstrates that there are local variations in both the availability of memory care supply and of the dementia Medicare beneficiaries in the Primary Markets.

This analysis also  demonstrates that there are metros where there are higher levels of memory care units available to serve dementia Medicare beneficiaries, and there are other metros where there are many dementia Medicare beneficiaries and proportionately lower levels of supply available. This analysis is at the metropolitan market level, and deeper dives into smaller geographic regions in these metro areas could show more detailed information of local dynamics.

VisionLTC subscribers can use the VisionLTC platform to conduct a more localized analysis, drilling down into smaller market areas.

This section provides some of the caveats and limitations of the analysis that the whitepaper explains in further detail. For full description of the limitations, please see the full publication. This analysis does not account for utilization rates of home care services, which may also have differing levels of popularity and utilization between markets. The analysis also does not factor in income assumptions for the dementia Medicare beneficiaries or their children (although the Vision LTC portal does have some income data available to subscribers as well for evaluating local income levels). The analysis also does not account for potential regional differences in availability and involvement of family caregivers.

There is also the possibility that some of the totals of dementia Medicare beneficiaries could have notable declines due to loss of life from the pandemic when the data are updated with 2020 figures, as we know many older people with dementia have been severely impacted by the virus. As a result, some of the penetration rates of memory care units per dementia Medicare beneficiaries may be understated here compared to what the 2020 numbers may be due to declines from loss of life from COVID-19.

The NIC MAP Metro areas and the Vision LTC metro areas may not have the exact same geographic boundaries for all metro areas, though they should generally be the same or very similar. This is because the two services use different years of the Census’ boundaries for metros. Visual inspection of the boundaries for each of the Primary Markets did not illustrate notable differences at time of writing, but this difference may be important for any future analysis on a smaller market outside of the Primary Markets.

About Beth Mace and Anne Standish

Beth Burnham Mace is the Chief Economist and Director of Capital Markets Research at the National Investment Center for the Seniors Housing & Care Industry (NIC). Prior to joining the staff at NIC, she served as a member of the NIC Board of Directors for 7 years and chaired NIC’s Research Committee. Ms. Mace was also a Director at AEW Capital Management and worked in the AEW Research Group for 17 years. While at AEW, Ms. Mace provided primary research support to the organization’s core and value-added investment strategies and provided research-related underwriting in acquisition activity and asset and portfolio management decisions. Prior to joining AEW in 1997, Ms. Mace spent ten years at Standard & Poor’s DRI/McGraw-Hill as the Director of the Regional Information Service with responsibility for developing forecasts of economic, demographic, and industry indicators for 314 major metropolitan areas in the U.S. Prior to working at DRI, she spent three years as a Regional Economist at the Crocker Bank in San Francisco. Ms. Mace has also worked at the National Commission on Air Quality, the Brookings Institution and Boston Edison. Ms. Mace is a member of the National Association of Business Economists (NABE), ULI’s Senior Housing Council, the Urban Land Institute and New England Women in Real Estate (NEWIRE/CREW). In 2014, she was appointed a fellow at the Homer Hoyt Institute and was awarded the title of a “Woman of Influence” in commercial real estate by Real Estate Forum Magazine and Globe Street. Ms. Mace is a graduate of Mount Holyoke College (B.A.) and the University of California (M.S.). She has also earned The Certified Business Economist™ (CBE), which is the certification in business economics and data analytics developed by NABE. The CBE documents a professional’s accomplishment, experience, abilities, and demonstrates mastery of the body of knowledge critical in the field of economics and data analytics. Anne Standish is a Research Statistician in the Outreach Group at the National Investment Center for Seniors Housing & Care (NIC). At NIC, Anne is an important contributor to NIC’s analytics and has been involved in a number of initiatives focused on the analysis of NIC’s seniors housing time series data. While working at NIC, she received her M.S. in Applied Statistics from Villanova University. She also has a B.S. in Psychological & Social Sciences from Penn State Abington. Prior to NIC, she worked in a range of academic research positions. Outside of having a passion for quantitative research methods and statistical analysis, Anne also has an interest in data visualization.